Richie Armand and Udoka Obiora graduate with the class of 2016

(Wenham MA) Julie and I took in the 2016 Gordon College graduation on sun-filled Saturday.

We attend this event primarily to get one last look at the seniors on the Gordon College men’s basketball team.

This year’s seniors were Richie Armand and Udoka Obiora.

Both players contributed to the ’15-16 Scots off the bench.

Richie was a passionate presence on the court and a fan favorite.  Richie hesitated to shoot but never hesitated on defense.

Udoka was easily, in my opinion, the most improved player on the team.  This season he handled the ball better, could get points around the basket, and blocked plenty of inside scoring attempts.  I had many pictures this season of Dokes rejecting shots.

I go to get pictures of players but can’t resist taking other photos as well.  I recently acquired a long lens and it was a big help in several of the long-range shots included in this entry.

We wish Richie (Education major) and Udoka (Economics and Business major) God’s blessing as they venture into the “real” world.

Julie with the Bretons 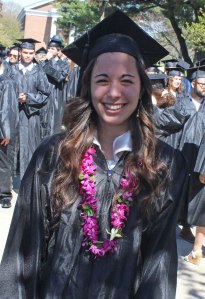 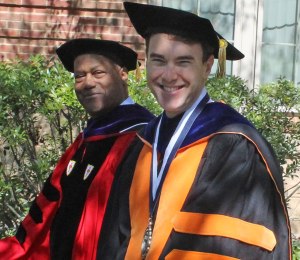 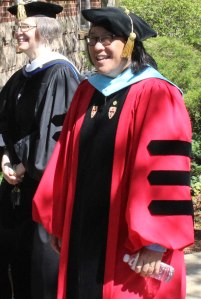 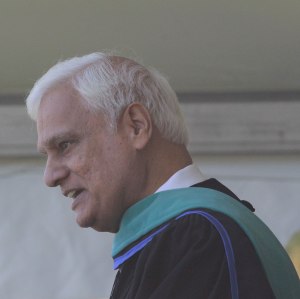 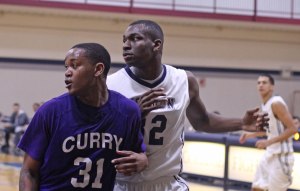 Udoka Obiora (32) had his best game as a Scot

(Wenham MA) It has been a very tough last 2 ½ years for the Curry men’s basketball program.

Three years ago in March the Colonels won the Commonwealth Coast Conference title. How do I know? I was there in Milton as the Gordon team lost in the championship game. I was also on hand to endure, with a large group of Gordon fans, the celebrations afterwards that championships bring.

Since that glorious time, the bottom has fallen out for Curry. How does 11-52 sound?

Today was more of the downward slope as Gordon coasted past the Colonels, 103-64, on Saturday afternoon at the Bennett Center.

Noah Szilagyi puts up a floater in a crowd of Colonels

There was no turning back in this one. Gordon shots were falling off of plentiful good looks. The Scots also had twenty-one offensive rebounds that led to even more scoring opportunities.

Curry struggled on the boards (only 25 rebounds) and had few answers defensively. The Colonels dressed ten players and the long minutes of the starters made fatigue a factor.

Sam Johnson goes for a block against Luke Schreiner

Senior Richie Armand saw his first action of the season and was a spark in the early going. He came in to a 21-14 score and exited 4 ½ minutes later with the GC lead extended to 34-18. Richie found himself wide open behind the arc on his first possession and reluctantly took the shot. That 3-pointer drew the biggest cheer of the afternoon from the Gordon bench which obviously has noticed and appreciated Richie’s effort to get back on the floor after a serious injury last season.

Four Scots made the Efficiency Chart. Freshman Jake Haar and senior Udoka Obiora had career games to make the list.

Jake hit a season-high, five 3-pointers on just six attempts. The guard from California has gone a sizzling 14-for-22 from long range over the last four games.   Anticipate that folks from Nichols (Thursday) and Endicott (Saturday) will be locating #20 real early.

Udoka did not miss a shot and added eight rebounds to it in thirteen productive minutes.

Nichols is next for the 7-6 Scots on Thursday. The Bison (9-3) like a fast pace and love to press. Gordon, of late, hasn’t minded the fast pace but can they take care of the ball?

Eric Demers (18 points) had twelve points in the breakaway first half.

Everyone on the Gordon squad got minutes today. I loved seeing the regulars enthusiastically cheering on players with a lot less game time. 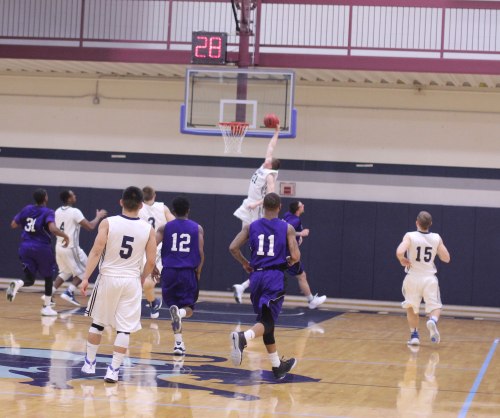 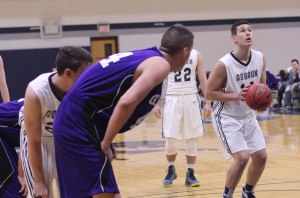 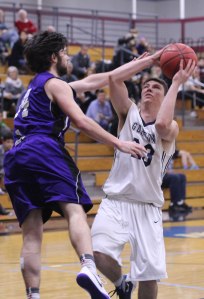 Kevin LeBlanc (22) launches from the corner 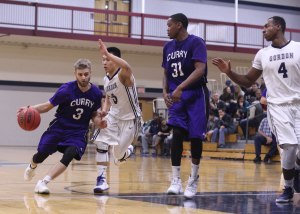 Cody Hunt on his way to the basket 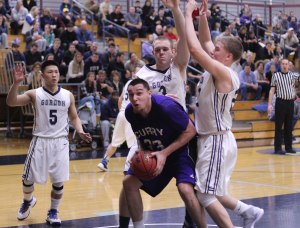 James Pina (33) in a defensive crowd

Gordon ended a three-game losing streak with a very convincing, 85-52, win over Lesley University in Cambridge on Saturday night in non-league action.

The Scots (3-6) broke a 16-15 game wide open with a run of fifteen unanswered points over an eight minute stretch in the first half.  The cold-shooting Lynx (1-6) trailed 36-20 at halftime and things went downhill for them rapidly in the second half.

The Scots had terrific contributions off the bench against Lesley.

GC Coach Tod Murphy found time early in the game for Craig McFarlane and the seldom-used senior had a big part in Gordon’s breakaway.

Freshman Carter Bras had a remarkable 15-point second half with no missed shots and three rebounds.

Udoka Obiora has his best game for GC getting six points and eight rebounds.

During Gordon’s 15-point run away in the first half Hans Miersma provided eight of the points including a dunk.  While the Scots were making shots, the home team had eleven straight misses with three turnovers tossed in.

Gordon finishes the 2014 part of their schedule with a solid win.  The next game will be at WPI on January 2nd versus Worcester State.

The Lesley win aside, the Scots will have fifteen Commonwealth Coast Conference games after the 2015 opener with Worcester State to improve their 1-2 league record and get positioned to defend their CCC title in the New Year.

Christmas, the time we remember what God did and rejoice that He cared that much for us.  How blessed we are!

(Amesbury MA)  Gordon was shorthanded but not short of heart.

Minus three starters, the Scots still gave the Saturday afternoon Bennett Center crowd in Wenham (MA) plenty to cheer about in an, 88-81, loss to Salve Regina.

(When I’m looking for ice I go to the nearby freezer, not out on the roadways.  So I chose to view this game via the Gordon website.)

The Scots shot very well early, in fact had a nineteen point lead (40-21) in the first half.  Points were going up in a hurry for the home team but you couldn’t help but fear a cool down.  And it came in the second half.

While Gordon struggled in the second half, the visiting Seahawks couldn’t miss.  The team from Newport (RI) shot an incredible 68% for the half and caught the Scots (53-53) with 13:11 left.  Credit Gordon for not going away.  For the next 8+ minutes Gordon matched Salve.  I’ll give credit to a very active student section for lifting the home team.  Down 75-74 with 4:42 left, however, SR was able to create separation and won by seven, 88-81.

Sophomore Barrett Hanlon had a season-high 32 points for Salve.  The 5-10 guard surely found this win satisfying.  In the January 11th loss to Gordon (71-70) Barrett missed two free throws and a jump shot in the final twenty-two seconds.  Today, Barrett hit two jumpers in the last minute of the first half to bring SR to within eleven (45-34).  Later it was his three that tied the score at 53-53.

Gordon’s Alex Carnes (27 points) was just about as hot as Barrett.  The GC senior ended up draining a career-high, six three-pointers.

This was a day in which there was plenty of Gordon offense.  Four players ended up in double figures.  What caused the loss?  Lack of defense.  I had to go back four years to find a game in which the Scots gave up more than the 88 points they did today.  Did I mention that three starters were missing and each is a special defender? 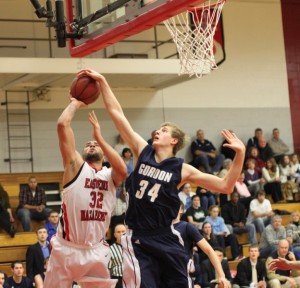 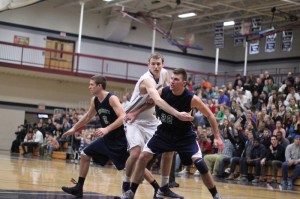 Understand that the league loss doesn’t really change anything for Gordon as far as I see it.  The goal for (11-5) Gordon, as they enter the final week of conference play, is to finish in second place. They can’t catch (14-2) Nichols.  Wins this week over Roger Williams (Tuesday – away) and Eastern Nazarene (Saturday – home), however, will assure the Scots of second.

It won’t be easy.  Gordon had a home loss to Roger Williams in January while ENC has won eight straight including a win recently over Nichols.

Sophomore Udoka Obiora had five blocks versus Salve.  Given the chance to play during the past two games, he has shown that he can contribute.

Dominic Paradis reached a career high with his 16 points today.

Lord willing, a week from now the CCC tourney setup will be in place and the Gordon seniors will have been recognized.

In my opinion, there won’t be a team in the CCC tournament that Gordon can’t defeat, including Nichols.  The dream scenario is for GC to finish second, win their two home-tourney games, have someone knock off Nichols, and face Endicott in a jam-packed Bennett Center on March 1st!

Sam Johnson had a marvelous game vs UNE getting 22 points, 10 rebounds, and an efficiency rating of 26.

Udoka Obiora reached a season high in minutes (14) and points (5).

(Amesbury)  I was going to leave this one alone.  But that was then.

I turned Wednesday’s Gordon/UNE game on in the second half and it didn’t take too long for me to join any of you also watching in saying, “Hey, what’s going on?”

UNE’s absolutely outstanding game coverage not only had the video going but beside it you could follow the accumulating stats for both teams.

A quick look at the Gordon stats revealed that freshman Sam Johnson (22 points) was having a remarkable game.  However, an even closer look revealed that three starters (Hans Miersma, Taylor Bajema, and Jason Dempsey) were unlisted.  Something was definitely going on.

From my vantage point in Amesbury (my road-game, on-site coverage will start in the tournament) I couldn’t get an answer to the, “Where are they?” question.

I continued to watch and wonder as the game unfolded and the Scots came away with a nifty, 66-59, win on Wednesday night in Biddeford (ME).

Last time Luke hit a shot like that was in the Gordon win at Endicott in the final minute as a two-point Gulls’ lead vanished during a delightful evening in Beverly on January 29th.

In most games there are players that get into double figures in efficiency with some occasionally getting into the 20’s.  Nothing like that in this game.  It was Sam Johnson and then everyone else.

Sam had twenty-two points and ten rebounds to register a nice 26 in efficiency.  No one else, on either team reached double figures.  The team totals weren’t pretty either. 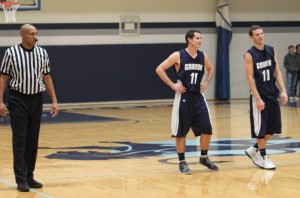 I loved the way Gordon played on despite missing three starters.  Players stepped up offensively and defensively to fill the void and pulled off the ugly win.

Commendable performance by 6-5 sophomore Udoka Obiora.  Udoka had played a total of twelve minutes in the previous sixteen games but in this one gave GC Coach Tod Murphy fourteen minutes, five points, and three rebounds.

Gordon will face Salve Regina (9-6) on Saturday afternoon at the Bennett Center (3PM) weather permitting.  Isn’t there always a storm in the forecast??

The three missing players?  The three of them live off campus with James Ek.  Something happened there earlier this week that led to a two-game suspension for all four of them.  They will be out of uniform and on the Gordon bench for the Salve game.

But a wiser head in my household, asked me these questions, “Don’t the players who were available to play deserve recognition for what they did without the three starters?  Why should those who weren’t there eliminate the coverage of those who were there?”  Good questions, I thought.  So I have ended up putting together this belated coverage of a great Gordon effort.

Boxscore from the game