(Wenham) The Newbury Nighthawks (5-11) opted to play a zone defense and Gordon responded with season highs in shots (63) and assists (26) and routed the visitors, 79-51, in nonleague action at the Bennett Center.

That is nine straight for the Scots to go with an impressive 13-3 record.

This game got out of hand early, with Gordon breaking a 3-3 tie after the first minute and following with a 16-2 spurt over the next nine minutes.  Greg Walker tallied eight of his game-high 16 points during a two-minute stretch in this run.  Greg is 5th in the Commonwealth Coast Conference in field goal percentage (55.8%) and thrives when teams choose to concentrate on Gordon’s long-range shooters.

The surprise on the stat sheet was Garrett Harden getting eleven points including eight in the first half.  These were not garbage time points.  The sophomore guard hit three of four 3’s in sixteen minutes setting career marks in points and playing time.

The Gordon passing was impressive from beginning to end.  They scored 32 baskets and had 26 assists.  That is about as unselfish as a team can get and it was great to watch.

Newbury, on the other hand, had 22 baskets with only five assists.  They had some terrific athletes but setting each other up on offense is a work in progress.

About five minutes into the second half, Gordon’s lead was 47-28 before Greg and Aaron Trigg combined for seven straight.  Moments later, with the score 56-34, the Scots put up 14 unanswered points in a three minute segment to get to 70-34 with 8 ½ minutes remaining.  During this stretch, JT Himmelstein started things with a sweet drive down the lane and ended it with a pass to Timmy MacDonnell in front of the Gordon bench that the senior turned into three points.

A 16-2 run by the Nighthawks against the Scot reserves closed the gap a bit and the final score was 79-51.

Brady took on Newbury’s top scorer, freshman Timothy Young.  He ended up with 15 points but few of them came early on when Brady was in coverage.

One hold-your-breath moment was when Brady decided to take a charge from fast-moving, leaping Rondell Best.  He got the charge all right but also got himself embedded into the Bennett Center floor doing it.  He got up probably wondering how (why?) his teammate Timmy MacDonnell goes out of his way to take charges. With his six points tonight, the 1000-point club watch for Brady is at 973. 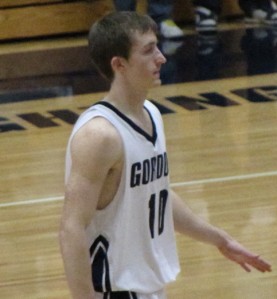 The best number of the night may have been Aaron’s 21 minutes of play.  He went into this game in seventh position in minutes (33+ per game) in the CCC.  Teams want to do well in the regular season but maybe just as important is having something left physically for the CCC postseason tournament that goes every other day.

Rondell Best (13) and Timothy Young (15) paced Newbury in scoring.  These freshmen were together on Brockton’s 23-1 Division One team.

You start to get a sense of the games ahead when you see Charlie Mason (New England College) in the stands as well as one of the assistants from Endicott.

During this season, Newbury has played seven of the CCC teams.  They defeated Anna Maria, New England College, Regis, and ENC.  They lost to Curry, Wentworth, and now Gordon.

While Gordon has won nine straight, their next opponent (New England College) has lost nine straight.  Would the Scots be silly enough to look past the Pilgrims toward Saturday afternoon’s return matchup with Endicott?  I sure hope not.

(Brookline) How hot is red hot?  I’m not sure but Jeff Derr might know.

This kid had a career game (23 points on eight-for-ten shooting) against nonleague Newbury on Tuesday night leading Gordon to an  84-66 win at Hellenic College in Brookline.

The Scots (12-4) took a double-digit lead (25-14) for good on a Ben Gaskill layup on a feed from Brady Bajema (eight assists) with eight minutes left in the first half.  Gordon approached a 20-point lead a couple of times in the second half but explosive Nighthawk guard John Rowley (14 in the second half) kept that from happening.

Coach Schauer told me last season after a similar scoring feast, “When you shoot like that, the game gets real easy.”

I’d say that Newbury contributed to Gordon’s scoring looks by trying at times to zone the Scots.  There were plenty of clear shots available most of the time.

Jeff led the way in this one but he was surrounded by teammates who were hot in their own right.  The Scots had their best game of the season from long range – 12 for 17.  Brady (3), Aaron Trigg (4), Austin Bentson (1), and Jeff (4) all dialed in successfully from long distance.

What led to many of the successful shots was Gordon’s willingness to pass, and pass, and pass around the perimeter looking to turn up wide open outside shots or to get the ball inside to Greg Walker.  This sort of patience led to a season-high 26 assists.

The Nighthawks (5-9) had just nine assists, which signals to me that the Gordon defense was tough enough to force them into one-on-one basketball.  Nighthawk sophomore John Rowley put on quite an impressive display of that type of basketball in the second half by getting to the rim and either making his shot or going to the foul line.

I continue to be impressed with the defensive efforts of Timmy MacDonnell and Austin.  They appear to take defending seriously every time they play.  Anyone heading to the basket with a head of steam up runs the risk of getting set up for a charging foul by either one of them.

The only flip side from this game is the avalanche of turnovers (21 in this one) that the Scots continue to commit.  In a game that saw numerous terrific passes for baskets there were plenty others that were intercepted.  Handling double-teams without panicking is a work in progress.  Arguably, the best team in the CCC, UNE, presses relentlessly.  They are the February 18th opponent at Gordon. They turned New England over 30 times.

There was a “crowd” of about 15, not counting the players and statisticians, when the game started at 5PM.  The numbers increased as players for the 7 o’clock women’s game arrived.

Newbury AD Peter Centola told me afterwards that Hellenic had put down the new floor, which is beautiful, in the summer.  A very long time ago, the Celtics used Hellenic for their preseason workouts.

The Scots are scheduled to be in Henniker (NH) on Thursday night – weather permitting – to face the Pilgrims at 7:30 in a Commonwealth Coast Conference game.

Plenty of skiing is available nearby, so why not come early and make a day of it.