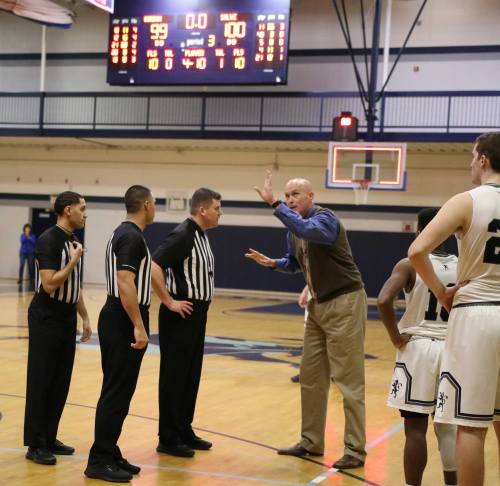 (Wenham MA) Did Eric Demers get the shot off in time?

Has the ball left his hands with time still on the clock in the distance? 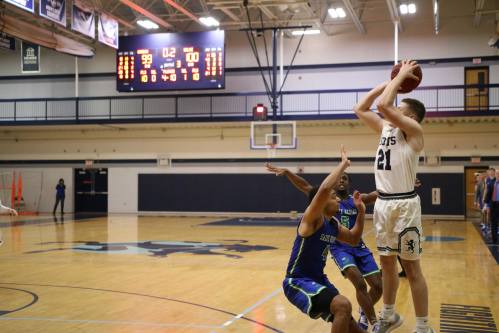 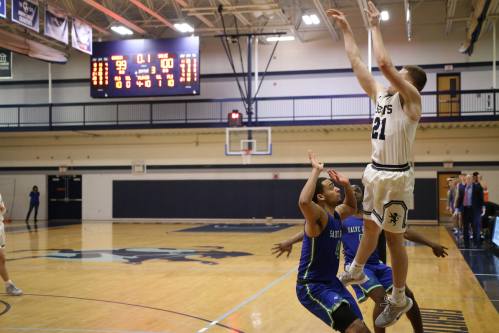 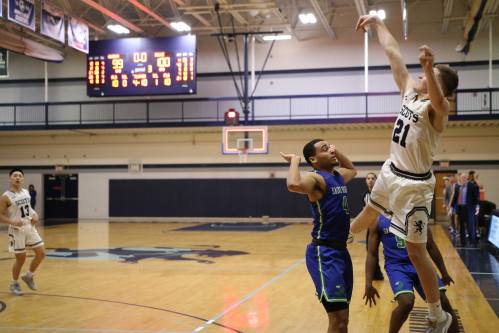 Cam Collins – Thirty-six points and a key block in overtime

“It was going to be an unhappy ending for someone,” said Salve coach Sean Foster afterwards.  “He (Eric Demers) caught the ball, turned, pivoted and let it go.  All that takes time.  I think the officials got it right.  I’m glad they did.”

Wednesday night against Wentworth, the Scots (8-7) trailed by ten in the first half and twenty in the second half before rallying to steal a win.

This afternoon the Seahawks trailed by twenty (38-18) in the first half before catching Gordon at, 67-67, ten minutes into the second half.

Like the Wentworth game, Coach Tod Murphy ditched the zone defense and went man-to-man the final nine minutes of regulation.  Things improved and the Scots rebuilt their lead to 87-79 with 3:12 left.  Make a few shots.  Drain some free throws and the W was theirs.

Not this time.  Gordon missed every shot they attempted (jumper, layup, two free throws, triple) in the final 3:12 and Salve was able to get into overtime.

Eric Demers makes a great pass at the end of regulation

The one Eric took in overtime did go in but wasn’t even considered a shot because the game had ended…….at least that was how the officials saw it.

Eric finished with thirty-eight points including ten in overtime.

“Eric is as good as it gets in this league,” said Coach Foster.  “He’s a tough cover.  He just continues to make shots.” 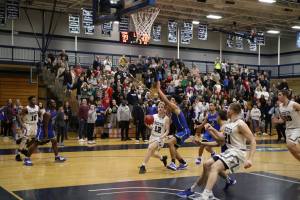 Junior Cam Collins (36 points) was immense for SR.  Cam carried the Seahawks during a dismal first half with nineteen points.  He added eleven in the second half and six in OT.  He also blocked Garrett Sattazahn’s go-ahead layup attempt in the closing seconds of overtime.

“In the first half we were really stagnant,” said Coach Foster. “We turned the ball over a ton against their zone.  Defensively we let up a lot of points right at the halo and deep into the paint.  I thought that if we could correct those things, we could compete a little better in the second half.”

They sure did that!  The Seahawks shot 61.3% (19/31) with ten assists and only two turnovers piling up fifty-four points in a stellar second half.

Junior Kevin Kelly (22 points) had twenty of them in the second half.

Salve Regina (6-9) was five-for-five in the overtime and forced a turnover and blocked a shot.

The victory was significant for the visitors from Newport (RI).  Why?  They had been 0-6 on the road before today.  Also, they had lost ten straight to the Scots stretching back to 2015.

Both teams are now 3-4 in the Commonwealth Coast Conference.

AJ Terry was limited to short minutes because of fouls

Gordon leads the CCC in scoring and points given up.  Just one defensive stop in overtime would have been enough for a victory.

Starter AJ Terry was a foul magnet for GC and only played eight minutes.  AJ is fifth in the CCC in rebounding (8 per game).

Coach Foster: “We were up by twenty last week at Wentworth and they came back.  The game is never over.  You play to the end and maybe good things will happen to you.”

Cam Collins had been averaging 16.6 points per game before today’s scoring explosion.

The Scots gave up an alarming fifty points in the paint.

Gordon travels to UNE on Wednesday. 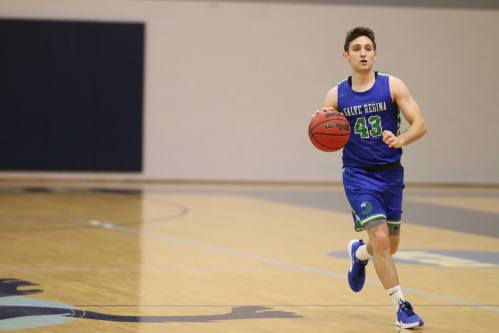 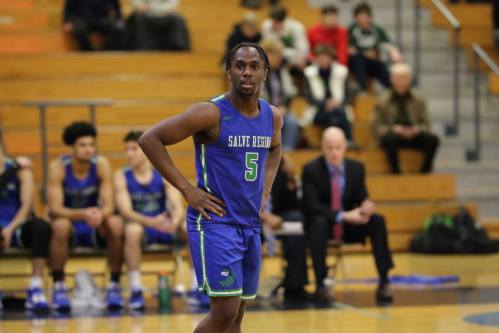 David Massillon to the basket 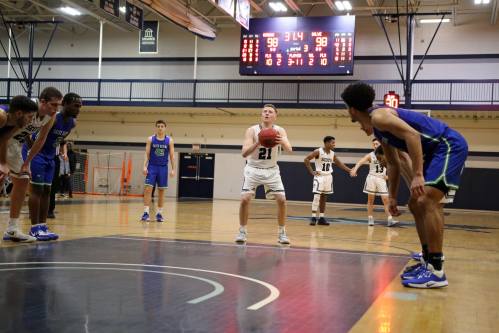 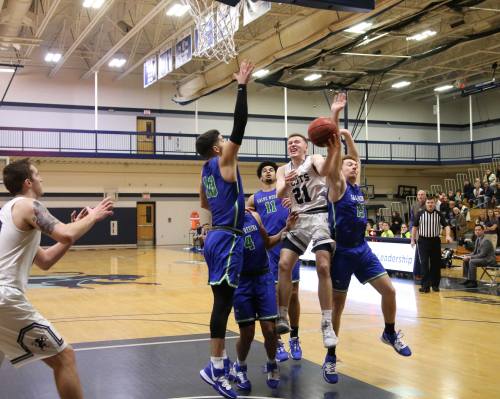 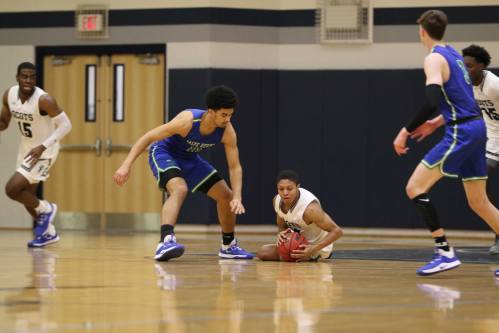 Zach Bennett on the floor 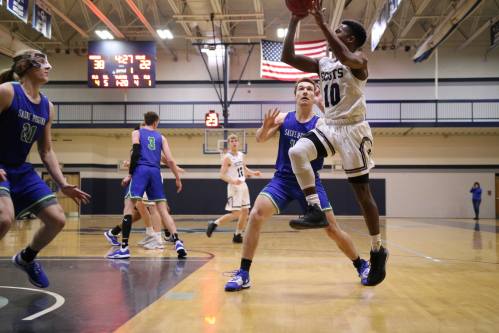 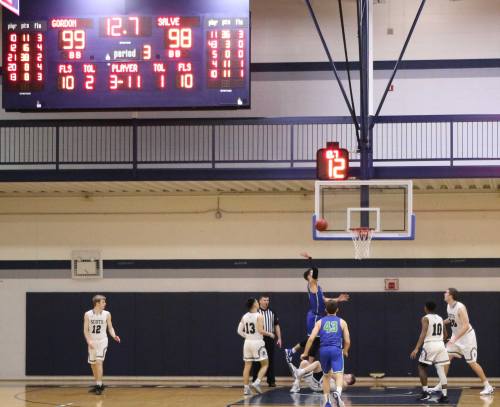 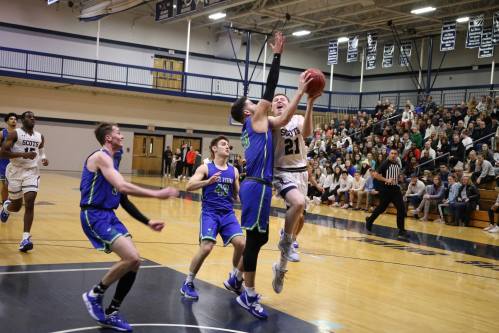