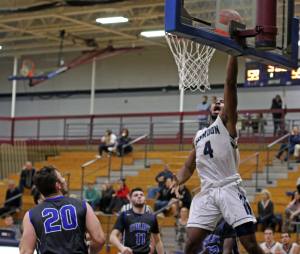 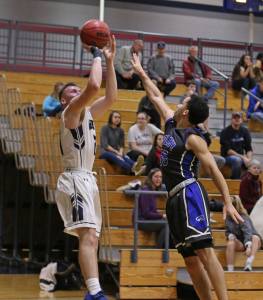 It was the Eric & Garrisson Show for the second straight game and that two-some led the Scots (20-2) past Curry, 88-75, on Tuesday night in Milton (MA).

The rematch with the Bison on the 13th at the Bennett Center is looking like the biggest regular season game in the Commonwealth Coast Conference this season.

I know that there’s a game this Saturday (Salve Regina) but……..just sayin’.

Tonight Eric Demers had thirty-one points and Garrisson Duvivier added twenty-four.  Curry (1-21) didn’t match up with either of them.

The Colonels seemed better able to play against the Gordon zone than some other teams do. At times they were excellent at passing into open shots and taking the ball at the Gordon shot blockers.  But they missed too many shots. 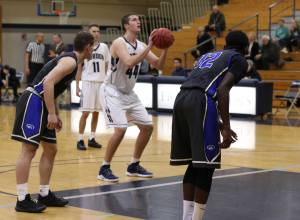 Parker Omslaer at the foul line

The Scots gained separation in the first half as they ran eleven unanswered points and turned a six-point lead (33-27) into 44-27.  Garrisson, Eric, Parker Omslaer, and Noah Szilagyi contributed.

In the second half, Curry closed to 68-61 before Garrisson put three layups and three free throws together and GC gained final separation, 77-63, with six minutes left.

Parker took full advantage of Curry’s smaller interior defenders dropping seventeen points and taking in fourteen rebounds.  This was his 4th double/double of the season.

No sign of starter Jake Haar and reserve David Massillon.  Trust that they will return soon.

This was Eric’s third straight game with 30+ points.  His seven turnovers were a big surprise.

Parker had a double/double but he missed seven free throws.

Turnovers and missed free throws could be decisive in the likely-to-be close games ahead.

I admire the enthusiasm I saw online from the Curry bench.  It can’t be easy.  The Colonels are now 2-92 over the past 3+ seasons.  They have lost 67 straight CCC games.  Last win?  Salve Regina in February of 2015.  This season they beat Clark on December 29th.

Seven seniors to be honored on Saturday before the game with Salve Regina.  Time goes by fast!

Wondering how others explain how Gordon has put together a season that exceeded expectations??

Maybe someone who has already won two CCC titles will finally get recognized by the league.