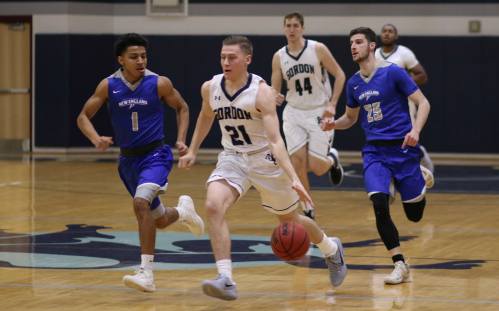 (Wenham MA) You start off missing two shots and having three turnovers.

The opponent steals the ball nineteen times in the game.

Okay, now we’ve got the bad news out of the way!

Gordon recovered from the loss to Western New England on Saturday by defeating the University of New England, 100-71, on Tuesday night at the Bennett Center.

Gordon coach Tod Murphy liked his team’s defense: “We won this game on defense.  They had only fifty-one points with five minutes left.  They’re a team averaging over ninety points a game.  We contested everything.”

Junior Eric Demers liked the Scots’ offense: “We needed a good offensive game like this.  UNE is a great team to bounce back against.  Everyone gets involved.  Everyone gets shots.”

The Scots (17-2) fell to Western New England on Saturday because they started slowly.  Tonight’s start looked like more of the same.

“Those first two minutes were a nightmare,” recalled Coach Murphy.  “We played terribly.”

UNE jumped into an 8-0 lead but it disappeared in a hurry.  The Scots began to make shots and their defense tightened up.

Gordon moved in front 16-13 and then put effective offense/defense together for the next five minutes.  While the Nor’easters missed seven shots and had three turnovers, Gordon rolled off fourteen unanswered points.  Eric Demers had a layup, a three, and two free throws in this good segment.  Noah Szilagyi added a layup (after a steal) and a three.  Josh Ribeiro contributed a layup.

Earlier in the season there was a big lead against Curry that melted in the second half.  Not tonight.  The good Gordon defense stayed in place when the reserves had their turns on the court.

The visitors from Biddeford (Maine) substituted in quantity, pressed full-court, and fired three’s.  The firing three’s part was disrupted by the solid GC perimeter defense.

It was a career scoring night for Avelino.  The sophomore got to the basket and made several three’s.  The less said about his foul shooting, or the team’s foul shooting, for that matter, the better.

When Eastern Nazarene dropped out of the Commonwealth Coast Conference the team total changed to nine.  No longer is every team playing on the days of CCC inter-league play. Point?  Gordon has no game this coming Saturday and won’t play again (Wentworth) until January 29th.

“It’s a long stretch,” said Coach Murphy.  “We’ll probably take a few days off and go out and do some recruiting.  We’re losing seven players and need to track down some players for next year.”

On finding a replacement for Garrisson Duvivier: “Garrisson is one-of-a-kind.  I don’t think we’ll ever be able to replace him.  I think that David Massillon will be a terrific player in time.”

Garrisson had his 15th double/double of the season.  GD, in case you’ve forgotten, is Gordon’s 2nd all-time leading scorer. 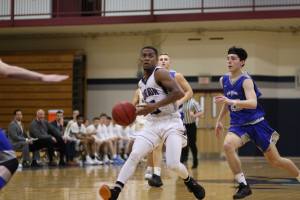 Eric Demers got into foul trouble and saw short minutes as a result.  He had only eight points but his teammate (Josh Ribeiro) assured me that there was no cause for concern: “Eric had a slow night but that’s just one night.  He’s going to come out and score thirty next game.”  Consider yourself warned, Wentworth!

“We had gotten very comfortable as a team,” said Eric.  “It was bound to happen.  It humbled us a little bit.  Western New England put together a great forty minutes and we only put together twenty minutes.”

Our neighbors in Beverly took another loss to Nichols tonight.  GC and Nichols have only one conference loss each.  The rematch in February (at the Bennett Center) is starting to shape up as a very special game. 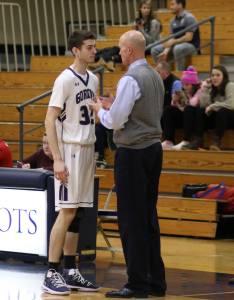 Jake Haar about to launch a three