(Amesbury MA) Gordon (4-1) started the Commonwealth Coast Conference part of their schedule by defeating Wentworth, 66-47, on Wednesday night in Boston.

The Leopards (1-4) are the masters of long possessions.  The strategy is to get high percentage shots and limit the other teams time of possession.

It can work against teams that are unwilling to play long-possession defense and who want to rush into shots down the other end. 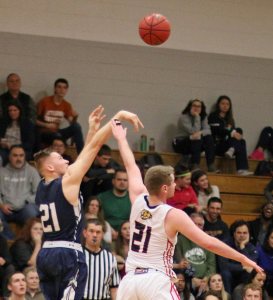 Tonight, Gordon rushed into shots, but their defense was anything but unwilling.  It was very active. It protected the inside and, on this night, reduced Wentworth to long-range attempts. That didn’t go very well for the home team.

The Leopards missed twenty-seven of their thirty-three 3-pointers.  Many of those attempts came after seconds ticked off in a possession.

Jake Haar’s 3-pointer with 2 ½ minutes left in the first half put the Scots ahead by double digits (32-20) and on this night the Leopards were unable to recover.

When was the last time you saw this in a college boxscore?  Wentworth two top scorers (Kyle Henseler & Stephen Azums) each finished with eight points.

Eric Demers paced GC with twenty points.  He and AJ Terry did most of the Gordon scoring in the second half.

Eric’s twenty points moves him into 16th place on the Gordon All-Time scoring list (1149 points) one point ahead of Hans Miersma.

Gordon had way too many turnovers (17) to suit me but on the other hand they had 17 assists.  There was more than enough good and not-so-good to go around.

Senior Noah Szilagyi has thrived in Gordon’s zone and has scored at least ten points in all five games this season.

Stephen did get his average (11.3) in rebounds with twelve of them.  On the other end, things were tougher because of Gordon’s zone.  Most of his points came off offensive rebounds.

Garrisson Duvivier had similar issues for Gordon.  GD got past his rebounds average (14.3) with sixteen.  Down the other end?  Not so good.  More turnovers (6) than points (5).

The good news?  Gordon had plenty of other scorers to pick up the slack.  And with the way the Scots were playing defense, there wasn’t a lot of slack to be picked up.

Next for Gordon is another CCC game.  Winless Curry will be at the Bennett Center on Saturday afternoon.  Tonight, Endicott had 46-18 lead on Curry at halftime!

This is a trap game of the highest order.  Beware!

My intentions are to make an appearance Saturday.  I will have covered a Super Bowl (Division 8) that morning.