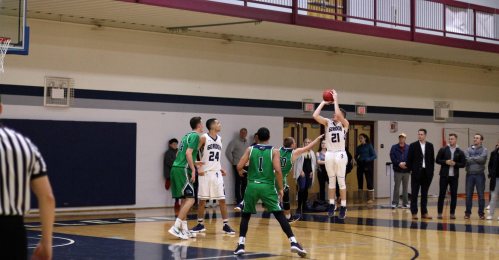 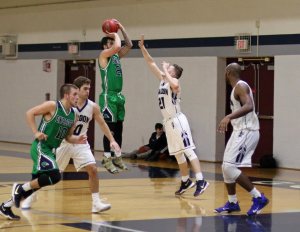 (Wenham MA) It had been over three years………and that was more than enough.

Gordon had lost six straight times to Endicott but tonight that stretch of bad endings ended as the Scots (8-5) outlasted the Gulls (9-4) 105-98 in overtime at the Bennett Center on Thursday night.

“It’s kind of what you expect out of an Endicott/Gordon game,” said a delighted GC coach Tod Murphy afterwards.

The coach is right.  With neither school back in session there was still a buzz in the crowd.  This is a Red Sox/Yankees type of rivalry to me.  The usual “coach line” is that “it’s only one game,” but to those of us invested in the Scots, a win over Endicott has a special sweetness to it.  And this was surely a sweet win.

Vinny Clifford (#21) goes for the block on Garrisson Duvivier

The Gulls insisted on playing at a fast pace and it paid off as they transitioned and passed into open looks in both halves.  The visitors from Beverly could put up points in a hurry but on this evening the home team had plenty of answers.

“I don’t want to get into a shootout with Endicott very often, but we’ve got some very good scorers too,” said Coach Murphy.

Keith Brown (28 points) paced the Gulls.  He came in with a 24.9 points per game average and displayed a variety of shots.

On this night, however, it was the Eric Demers show.  The sophomore had a career high thirty-three points and added five assists as well as five steals.  It was the best game I have seen him play.

The final spread was seven points but anyone witnessing this one at the Bennett Center would tell you that Endicott had big leads in each half.  Both times it was eleven points: 36-25 with 3 ½ minutes left in the first half and 63-52 five minutes into the second half.

But in the age of the 3-point shot, comebacks can happen in a hurry.  This was one of those nights.  Eric Demers made three’s and junior Jake Haar (22 points) did as well.  And when the Gulls overplayed the perimeter there was Garrisson Duvivier (19 points) in close for layups.

In overtime Eric, Jake, and Garrisson put eight unanswered points together and gave GC a 96-90 lead with two minutes left.  Endicott didn’t have the necessary offense/defense to overcome the deficit in the end game.

The Scots have now won four straight and are 4-2 in the Commonwealth Coast Conference.  The two CCC leaders (Nichols and Roger Williams) each have one loss.

“I know that we’re 4-2,” said Coach Murphy, “and I know that Nichols is the team to beat.  We’ll be facing them in a couple of weeks here at the Bennett Center.  However, we need to concentrate on the five games (Salve Regina, Roger Williams, Western New England, Curry, UNE) between now and then.”

One of the keys to this win?  The Gordon bench (Josh Crutchfield, Parker Omslaer, Noah Szilagyi, Josh Ribiero, and Jake Hart) has been able to come on and gain ground on opponents during the four-game win streak.  “We stuck with our subs for a long time,” said Coach Murphy. “They played well.”

Garrisson Duvivier nearly had the game-winner in regulation.  Garrisson collected his tenth double/double this season putting nineteen points together with fourteen rebounds.

Jake Haar had family from California in the house and he didn’t disappoint connecting six times from long range.  Jake’s best game? Last year he had twenty-three points versus the Gulls.

Endicott lost all their starters from last year and it is remarkable how quickly they have regrouped with new players.  One of the key additions to the team is Matt McDevitt (17 points,4 assists) who was the best player in Maine last year.

Rob O’Brien suffered a painful shoulder injury in the first half.

Former GC players Shaun Roach and Park Thomas were on hand as well as the Dempsey brothers.

(All of the pictures above and below will enlarge when you click on them.) 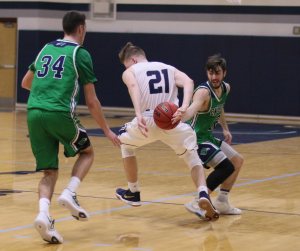 Joe Villa fires a shot at the end of regulation 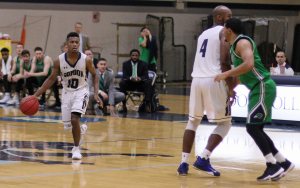 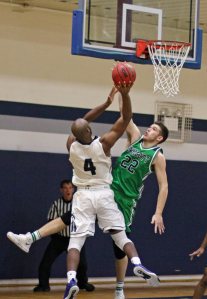 Battle inside between Garrisson Duvivier and Nick Thibeault (18 points) 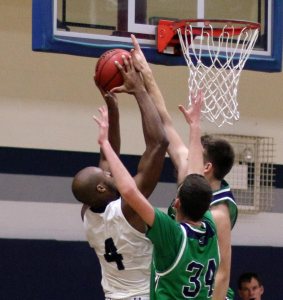 Struggle near the rim 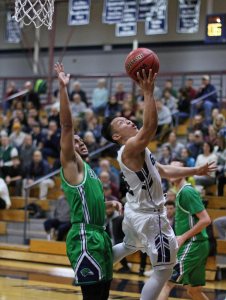 Jaren Yang gets a layup