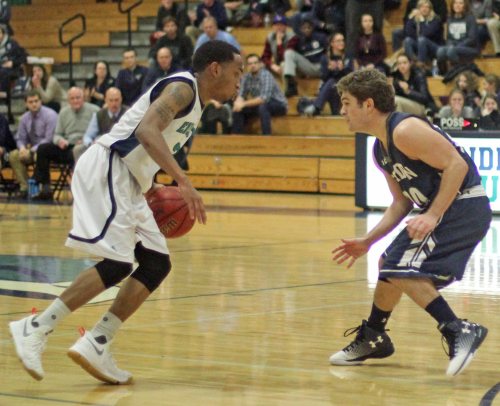 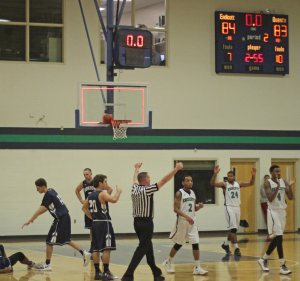 Game ends with the ball stuck!

(Beverly MA) As a party of one, I couldn’t be prouder of the way the Scots played their last two games.

Hey, they were losses but after the initial disappointment the positives far outnumber the negatives.

In both games the outcome came down to the final possession.  A stop defeats Nichols while a clutch hoop downs Endicott.

But neither happened and the Gordon (6-6) losing streak reaches four.

Endicott is now 10-2 and I can’t wait for their get-together with Nichols (10-2) on Saturday (January 14th) at Endicott.

I can also not wait for Gordon’s rematch with the two of them.  The Efficiency rating for both games showed GC to be the better team statistically.  Now to make it happen on the scoreboard!

Tonight’s game with the Gulls had so many attention-getting stats.  Where do you start? 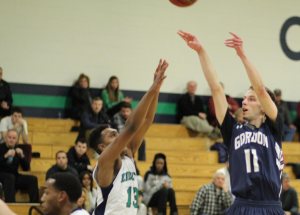 Noah Szilagyi (10 points) came off the bench taking and making

The Gulls won this game despite not scoring a single point over the final 3:49 of it.  Remarkable GC defense limited Endicott to four (missed) shots and caused a turnover.

That was the good news.  The bad news was that the Scots did not capitalize.  They did get a free throw (Garrisson Duvivier) and a last-minute three (Jake Haar) but missed five other field goals and two free throws.  There was also a turnover.  The opportunities were certainly there.

Last possession: Plenty of time (nearly ten seconds) but no timeout.  The Scots ended up with a heavily defended jumper by Garrisson in the last second that actually wedged itself between the rim and the backboard…….I’m not making this up!  And that was the game. 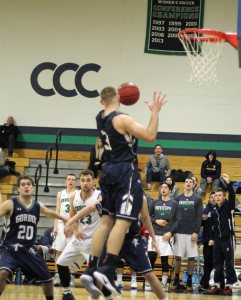 Sam Johnson grabs one of his eighteen rebounds

The Gulls did an excellent job of limiting Sam Johnson inside.  But they couldn’t keep the non-stop senior from gathering eighteen rebounds.  Twelve of them were on the offensive end.  In the last minute, Sam collected a missed free throw (his own) and set up Jake Haar in front of the GC bench for his seventh triple.

Jake Haar led all scorers with twenty-three points.  He matched his season high in shot attempts with ten.  Finding him more shots would make complete sense.

The Scots will be at the Bennett Center on Saturday afternoon (3PM) to take on Salve Regina.

Odd to be at Endicott for a game with most of the students away.  That place can get noisy and nasty (?).

Eric Demers shoots from the corner 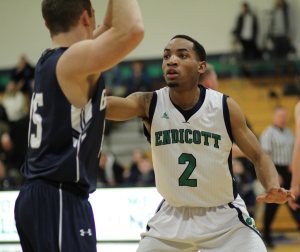 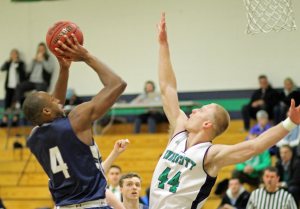 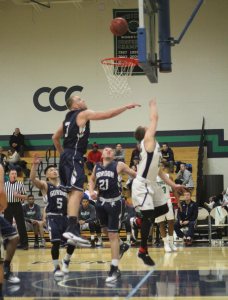 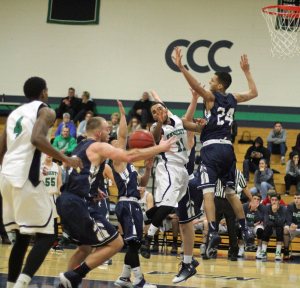 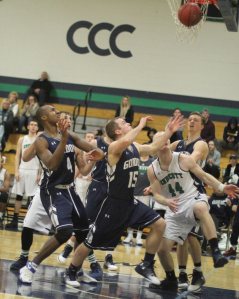