Taylor Bajema goes under and up against Western New England

(Wenham) Western New England limited David Dempsey to five points in their win over Gordon in November in Springfield.

This time around Gordon’s tenth all-time scorer had five points in less than four minutes and went on to have a big 25-point night leading Gordon (12-5 overall/ 7-3 in the Commonwealth Coast Conference) past Western New England, 79-71, on Wednesday night at the Bennett Center.

The Gordon win coupled with Curry’s loss (119-112) tonight to Nichols gives the Scots a chance to tie the Colonels for the top spot in the CCC on Saturday afternoon in Milton. Curry is 8-2 in the CCC.

(Before I forget, Nichols’ Ryan Sheehan had thirty-eight points in the Bison win.  Makes you appreciate the job Luke and Alex did limiting Ryan to nine points this past Saturday.)

Hans Miersma dunks in the first half

Western New England (6-11) was a worthy opponent with plenty of hustle.  That is the only explanation I can think of for their being able to out-rebound Gordon 40-30.  And Hans Miersma (the CCC’s top rebounder) had only three rebounds!

The Golden Bears jumped into an 18-13 first half lead after twelve minutes before the fast-closing Scots tallied six points (David Dempsey-old-fashioned three, Alex Carnes-very late three) in the last twenty-six seconds to get in front by ten (39-29) at the half.

Gordon would elevate their advantage to as high as seventeen (66-49) in the second half with close to nine minutes left.  The thoughts of a cruise-in from there, however, were dashed as WN went on a 17-6 tear over the next 5 ½ minutes.  Suddenly the game was no longer in the comfort zone (72-66) with 3:12 to go.

However, Gordon did not blink.  Park Thomas hit a clutch jump shot and, after a WN missed three, Hans Miersma put in a layup assisted by David Dempsey.

Those baskets restored the Gordon lead to ten (76-66) with 1:47 left and the Golden Bears could not make enough shots to offset three David Dempsey free throws the rest of the way. 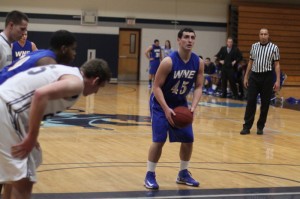 Dennis Rinaldi (18 points) was impressive for Western New England.  The 6-4 junior made a number of shots close to the basket despite being near to several Gordon shot blockers.

Luke Hamilton put his defensive teeth into WN’s usual high scorer, Damon Alston (12.8 points per game) and held the senior to a 2-for-12, seven-point evening.

The glaring stat from this game was WN getting eighteen offensive rebounds.  Understand that WN only missed seven 3’s so there weren’t too many wild caroms to contend for.  The Golden Bears just wanted the rebounds a little more than the Scots……or so it seemed.

The glowing stat?  Easily it was five turnovers for the ENTIRE game!  Granted Western New England didn’t press until the end, but that miniscule number shouts efficient ball management.  Gordon had two nine-turnover games last year but those two and this one are the only single-digit turnover games in the past four years.

Alex has been a spark off the bench.  He led the Scots in rebounds with five.

Taylor Bajema (eight points) took five shots and made them all.  He also had three assists, a block, and a steal….and earned second place in the efficiency stats.

David Dempsey took a heavy fall after getting tangled up with Damon Alston on a breakaway.  Damon was quick to make sure that David was okay.

The crowd went from very slim to decent, thanks to the supper hour (5:30PM) start.  I personally like the early start because it gives me more pre-midnight time to get this blog done.

Gordon missed eighteen 3’s and nine free throws in the December 1st (73-62) loss to Curry at the Bennett Center in the first meeting.

Eastern Nazarene took a loss tonight to Roger Williams and they are now tied with Gordon in second in the CCC standings at 7-3.

(All of the pictures above and below will enlarge considerably and get in better focus if you click on them.)