Hans Miersma about to dunk at Nichols

The Scots have won four straight and nine of their last ten.

This afternoon Gordon (11-5) put together a dynamite second half and defeated Nichols (9-7), 81-65, in Commonwealth Coast Conference play.

Ryan Sheehan (9 points) gets off a shot

The answer was a resounding, “Yes…..and then some.”  The Scots held Nichols to twenty-seven second-half points while Luke Hamilton and Alex Carnes limited Ryan Sheehan’s touches and points (two) in that half.

That effective Gordon second half defense combined nicely with an offense that produced five players in double figures in points.

Hans Miersma (17 points/13 rebounds) was a bad matchup for Nichols from the beginning.  His defenders either got into foul trouble covering him or needed teammate help to cover him.  More defense on Hans opened things up for other Scots’ players getting higher percentage shots.  Gordon shot 54.2% for the game.

Forget the final score, the Bison were within six (52-46) four minutes into the second half and certainly well within striking range.

Alex Carnes (11 points) above the crowd

However, over the next 6 ½ minutes Gordon put the home team in deep trouble with a 14-3 segment to get up by seventeen (66-49).  An old-fashioned three by David Dempsey (15 points), three baskets from in close by brother Jason (I think one of them was a dunk), a three by Shaun Roach, and an Alex Carnes (11 points) layup did the Gordon damage in this crucial run.

Nichols made things a little interesting (71-60) with 4 ½ left but Taylor Bajema (13 points), Hans, and David combined for nine points in less than two minutes and that was enough for a, 80-62, Gordon lead. On came the reserves for both teams to finish the game.

Matt Langadas (13 points) was the lone Bison in double figures.

Ryan Sheehan was limited to nine points.  The first time down the court the 6-4 junior had a wide open look at a three which he nailed.  After that there were no good looks outside thanks to the defensive persistence of Luke and Alex. 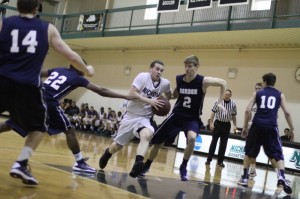 The Gordon free throw shooting was a remarkable fourteen-for sixteen.

6-7 Jeff Schmeltz got the biggest home crowd reaction with thunder block of a Luke Hamilton driving layup attempt early in the first half.

Nichols tried a zone early in the second half but only briefly after Gordon passed it apart for points.  (Everyone in the CCC is well aware that Gordon’s only loss in the last ten games was to a UNE team that zoned the Scots.)

Gordon gets a second shot at the other nine teams in the CCC the rest of the regular season.  Next week it will be Western New England at home on Wednesday (7:30PM) and Curry Saturday away (3PM).  Both of these teams had victories over the Scots the first time around.  It will be interesting to see if the greatly improved play of the Scots since those losses will continue.

James Ek made his debut for Gordon.  The 5-11 point guard put in meaningful minutes.  The sophomore looks like yet another player with the ability to come off the bench and contribute.

The high level of Gordon play is reinforced by the fact that three of them (Hans, David, and Jason) ended in the plus 20’s in efficiency.

Team stats for this game in efficiency:
Gordon +104
Nichols +68

(All of the pictures above and below enlarge considerably and get better focus if you click on them.)

Matt Langadas (13 points) in the lane