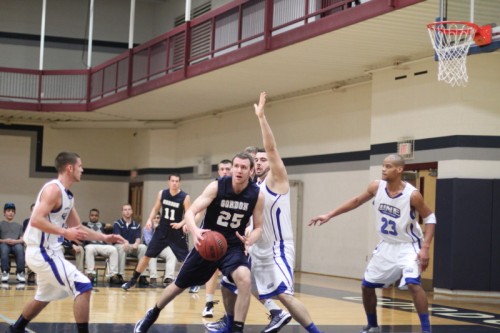 But when the Gordon/UNE game was over you couldn’t help but leave the Bennett Center wondering how either streak had been possible.

The University of New England defeated Gordon, 59-50, on Tuesday night at Gordon (7-5).

The Nor’easters (2-9) stunned the Gordon faithful in the process.  The Scots had been on a five-game roll.  David Dempsey had just been named Commonwealth Coast Conference Player of the Week.  Hans Miersma had registered double/doubles in four straight games.

But none of Gordon’s recent good news mattered as UNE made a zone defense work. That zone frustrated both David (8 points/6 rebounds) and Hans (4 points/6 rebounds).  Every touch in close for that twosome, in their favorite spots, brought multiple defenders.

Josh Butler had 10 points and 15 rebounds

Zones don’t usually work at the college level because it often gives outside shooters high-percentage looks.  After a few of those outside looks are cashed in the zone is discarded.

Gordon carried a nine-point lead (23-14) with seven minutes left in the first half.  Considering UNE’s five-game losing streak, and only one win in ten games, you assumed that Gordon would pull further away.

But they didn’t and the longer the game went the more dangerous the Nor’easters became.  The visitors from Biddeford were very deliberate with each possession.

The Scots last lead was in the second half (42-41) with eleven minutes left.  The rest of the way was shocking – Gordon totaled only eight points.

The toughest segment to watch stretched from 7:01 to 1:17 in the second half.  Gordon came up completely empty over that stretch.  They missed three 3’s, a jump shot, and a layup.  They also had two turnovers.

UNE missed some shots as well during that segment but they did get an early layup (Josh Butler).  The nail-in-the-coffin, however, was a three by Charles Fenner (15 points) with 1:51 left.  That three put the UNE lead at 52-44 and with the way the Gordon offense was malfunctioning it was enough to give UNE its second win.

Freshman Devin Thompson was terrific for UNE.  He put up twenty-one points and had just one turnover in thirty-seven minutes of playing time.  I realized afterwards that Devin had played last year for St. Mary’s of Lynn.  I checked my other blog and saw that Devin had gotten twenty-five points in the state D4 championship game that I had covered.

The fifty points the Scots scored was a season low.

Next game for Gordon is against Roger Williams (5-7) at the Bennett Center on Thursday night (7:30PM).

In another CCC game played today, Nichols defeated Endicott, 130-106, at Endicott!  No, it didn’t go into overtime.   Nichols made 17-of-28 three’s.  Seven different Bison players connected from long range.

Tonight’s game started at 5:30PM.  I like that arrangement although by the way the two team’s shot it may not have suited them very well.

The game against the Hawks on Thursday night is an important one.  Can the Scots recover from a team-wide bad game or will they head into a streak of losses?

(All of the pictures above and below enlarge considerably if you click on them.)

David Dempsey gets one of his five blocks

Devin Thompson ends the first half with a three

Craig McFarlane brings up the ball

Jason Dempsey had ten points in the first half